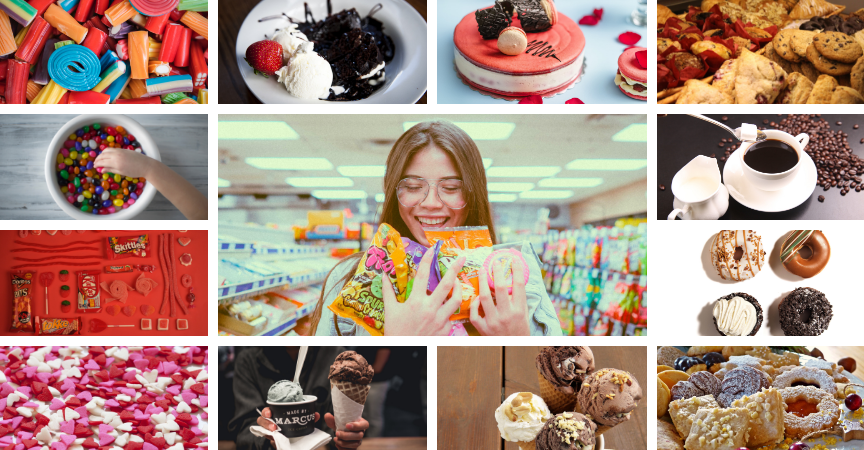 You’ve probably met more than one person in your life who take pride in their sweet tooth. It wouldn’t be too far-fetched to say that a lot of us have this too.

Birthday cakes, candies, cookies, sugary pastries, doughnuts, ice cream — they’re just too good to resist. In fact, sugar consumption is ingrained so much into our lifestyle that most of us don’t even deign to give it a second thought. In fact, science has shown that the taste of sugar is something all humans are born craving.

Some people try and create resolves to cut back on sugar intake, but they find this practice difficult to maintain. Sugar makes things better, doesn’t it? Sodas are refreshing beverages, and adding sugar to coffee makes it taste better. Dessert can be the best part of any meal. For others, eating and drinking food laced with oodles of sugar is the highlight of their day.

All of these considerations lead to one question:

Do I have a sugar addiction?

Sugary Rewards for Everybody

As a child, what was the most common food reward your parents would promise to give to you?

The landscape of everybody’s childhood is different, but most children relate to receiving sweets and chocolates as rewards for good behavior or excellent grades.

Scientific studies show that sweet food appear highly desirable due to the impact sugar has on the reward system in our brains. The technical term for it is mesolimbic dopamine system. The neurons in your nervous system release dopamine in response to a rewarding event.

“This chemical circuit is activated by natural rewards and behaviours that are essential to continuing the species, such as eating tasty, high energy foods, having sex and interacting socially. Activating this system makes you want to carry out the behaviour again, as it feels good.”

So there you have it. Science pretty much confirms that sugar can be as addictive as cocaine.

Why does it happen?

As in the case of every other addictive element on this earth, constant repetition builds a tolerance that may or may not be harmful to your body. In this case, it’s the former.

Repeated activation of your brain’s dopamine reward system — eating sugar daily in excessive quantities, for instance, causes the brain to adapt to the frequent stimulation. Too much enjoyment of consuming sugary food triggers your brain to release dopamine. In response to that, your body adapts to the change to prevent it from becoming overstimulated. Dopamine receptors start to down-regulate.

For this reason, your body has fewer receptors for the dopamine to bind to. With each daily over-consumption of sweets, the effects become blunted. To get the same rewarding feeling, more sugar becomes necessary.

The process easily morphs into a destructive cycle. This is similar to the tolerance presented by drug addicts. It all leads to escalating consumption.

And like every medical journal and a personal doctor would tell us, uninhibited consumption of sweets lead to unwanted bodily effects. They include weight gain, dental issues, metabolic disorders, and diabetes.

Here are five clues that say you might be addicted to sugar, according to Mark Hyman, M.D.:

Fair warning if you’re already addicted to sugar: there are withdrawal effects.

Withdrawal symptoms are caused by the dopamine system readjusting to the loss of sugar in your everyday diet. The temporary drop in dopamine levels may lead to various psychological symptoms including intense cravings.

And if you find that you’re on the road to sugar addiction, perhaps it’s time to think twice about your daily diet. It’s not too late to adjust your consumption in response.

Reducing sugar intake can be a challenge for a lot of people. Considering the number of sugary temptations present everywhere, the thought of a sugar detox seems impossible. My response to this, however, is to keep your good health in mind.

Do you want to live a life free of complications in the future?

Then cut down on the excess consumption. You’ll thank your decisions in the long-run.

Great tasting food consumed in moderate quantities can be such a stress-relief. Keep looking around Wellnessfit for more health tips.