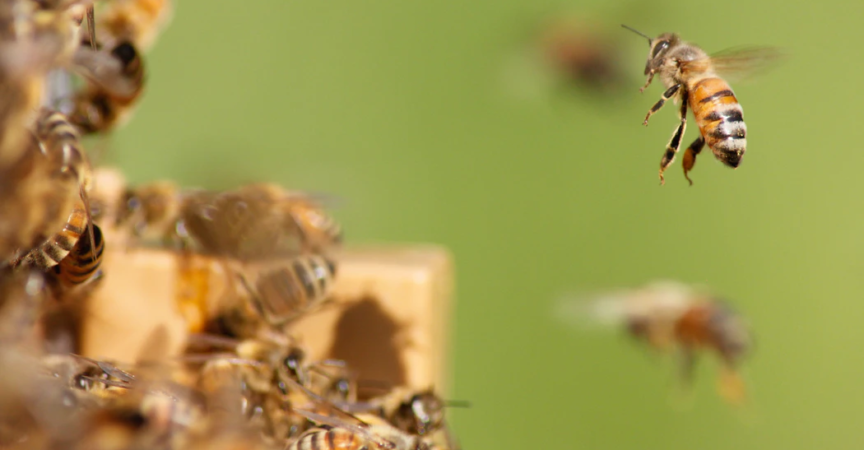 Honey hunting is more than a means of income for the Gurung and Magar tribes, for them, this is a way of life. The survival of whole tribesmen’s clans depends on the honey hunters who chase honeycombs to make their livelihoods possible in these mountainous regions. These tribes have practiced the ritual of honey-hunting for millennia, and the skills needed to collect these golden honeycombs are unique to the hunters.

On the cliffs of the Himalayas lies a sweet secret treasure trove of the best Himalaya mad honey in the world. Created by one of the largest bee species in the world, the Apis Laboriosa commonly known as the Himalayan honeybee. The beehives are hidden under the southwest cliffs protecting them from natural predators and sunlight that might damage their nests. Because these mad honey bees form their hives in such precarious locations this makes the process of hunting mad honey from Nepal not only scary but also life-threatening. Harvesting mad honey Himalayas comes with risks.

After all these years the honey hunters of Gurung and Magar have not changed how they go about harvesting Himalaya mad honey. They have kept to the ancient ways the honey hunters before they have used. This is because ancient honey hunting practices have always been about stewardship and preserving the natural habitat of the mad honey bees.

Honey hunting typically occurs during the autumn season. The honey hunt takes three days followed by a ritual performed by the villagers asking their ancestors and gods to guide the hunters and to ensure a safe and bountiful hunt. It’s common for them to make sacrifices of fresh fruit, sheep, and rice to appease their gods. The honey hunters leave their tribes in squads after the ceremony to collect the illustrious mad honey from Nepal.

All the mad honey Himalayas hunters have to rely on are long bamboo sticks with sharp hooks on the end and a hand woven hempen rope. The hunter, called the ‘Kuiche’ by the people of the tribes, clings to the rope ladder as the smoke is made to rise into the steep cavities where the nests are mounted. The smoke subdues the mad honey bees and forces them to leave their hives, and in this short window of time the hunter must use the sharp hook on the end to cut away honeycombs and fill a large bucket before their compatriots can lower them. When one hunter harvests the honey at a time, a dozen other men assist the hunter in shooting, which must ensure the hunter’s welfare, trapping a rope about 200 feet above the ground.

After the hunt is over, the hunters bring back their prizes and share their spoils with the rest of their village. The most common use of Himalaya mad honey is making honey tea, which is appropriate considering the cold Himalayan climate. Few of them are eaten, while most of them are sold to outsiders. In recent days, both the price and the demand for these mad honey Himalayas have risen rapidly. Countries such as Japan and Korea import mad honey from Nepal for their medical benefits.

However, this cultural tradition is quickly changing thanks to western tourism. Tourists travel to these villages to participate or witness the ancient process of honey hunting Thus, travel and touring companies have begun offering honey-hunting as an adventure sports package. Tourists are joined by a honey-hunting party to witness Himalaya mad honey’s staged extraction from the hills of the Annapurna circuit. The regions of Lamjung, Ghandruk, and Manang are renowned for these activities. Tourists are paying more than 2000 dollars for an adventure, and a very small amount of the total is paid to the tribesmen. The publicity that the art of honey hunting has gained from visitors cannot be considered the greatest, as it lures honey-hunters to search for extra money out of season. Hunting off-season will endanger hunters’ lives and kill bee nests that lead to the reduction of bee habitat and honey production.

Apart from this, the government has obtained these hills’ jurisdiction and is seeking to hand them over to contractors for marketing purposes. This will most likely leave the true honey-hunters unemployed. The changing climate also does not support the cause by delaying the hunting seasons from their normal time. The move of younger generations to the city is a big problem for the elderly hunters, who have spent their whole lives expecting to turn the practice over to the next generation.

That is why it is important that we support local Nepalese businesses that closely work with the Gurung honey hunters. Like Best Mad Honey, we work hand in hand with Gurung tribes to bring you the best Nepal has to offer. Supporting local businesses doesn’t just put money in the hands of our farmers but it also keeps the rich culture of honey hunting alive. Order a jar of mad honey today!

Jen Hensey is a writer and blogger of LifeStyleConvo & UrbanHouses, who worked as a full-time content creator. A writer by day and reader by night.